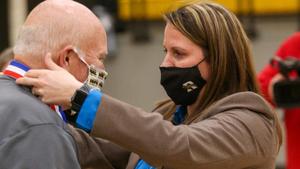 Congratulations to retired Coach Bill Cleary and 2006 Serra Catholic graduate Laura Grimm, who were announced today as part of the  WPIAL Hall of Fame Class of 2023.
Bill Cleary (Coach) – Finished his 34-year career with a record of 657-156 … One of four WPIAL girls’ basketball coaches to win more than 600 games … Guided Serra Catholic to 18 section championships, four WPIAL titles (1992, 1999, 2003, 2005), and 2005 PIAA 1A championship … Appeared in 10 WPIAL Championship Games, including in his final season in 2021 … Never had a losing season over his career and only missed the postseason once
Laura Grimm (Athlete) – Compiled career marks of 1,940 points, 497 assists, 391 steals, and 283 three-pointers over her varsity career … Led Serra Catholic to an 103-12 record in four seasons, making four WPIAL Championship Games appearances and winning the 2003 and 2005 editions, as well as the 2005 PIAA championship … Named the Associated Press Pennsylvania State Player of the Year in 2005 … Collected Player of the Year accolades from the Pittsburgh Post-Gazette and Pittsburgh Tribune-Review in 2005 and 2006 … Earned All-State First Team honors in 2005 and 2006 … Played collegiately at Colgate University
The WPIAL Hall of Fame was organized as a means of recognizing, preserving, and promoting the heritage of interscholastic sports in Western Pennsylvania. Many individuals have made extraordinary contributions and have achieved superb accomplishments in high school sports. The WPIAL Hall of Fame honors the contributions and accomplishments of these individuals who are worthy of recognition as examples for others to emulate.
The annual WPIAL Hall of Fame induction banquet, which will honor 15 inductees, will be held on Friday, June 2 at the DoubleTree Hotel in Greentree.